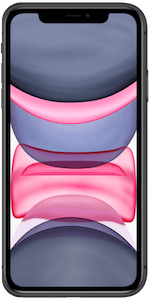 An impressive blend of power, style and top-drawer specs and features, Apple’s newest flagship has a lot to offer. Here’s everything you need to know…

At the front, the iPhone 11 looks a lot like its predecessor. However, Apple's flagship for 2019 also contains some welcome new specs and features. At 6.1 inches, the iPhone 11, with its sturdy glass and stylish aluminium frame, is a sleek handset with plenty of screen real-estate along with Apple’s trademark notch.

The biggest difference here is that the back of the phone houses two triple lens cameras in the top right-hand corner, all in a triangular set-up.

While this design might look a bit clunky to some, we think the camera under the glass back is rather pleasing on the eye.

Typically, Apple is conservative when it comes to colour, opting for boring old black and white over anything particularly stand-outish.

With the iPhone 11, though, Apple has stepped out of its comfort zone by offering six cool colour variants, including White, Black, Purple, Yellow, Green and (PRODUCT) RED.

Looking for news about the successor to the XR instead? Head to our Phone XR 2019 rumours round-up.

The iPhone 11 houses Apple's most powerful chip-set to date - the A13 Bionic. According to the Californian tech giant, it's the fastest CPU and GPU to ever appear in a smartphone.

Indeed, the chip-set itself is made up of four cores, each 20% faster and use 40% less battery power than previous processors. The phone sports a dual camera system made up of a 12- megapixel camera at the back and a 12-megapixel snapper at the front. Moreover, Apple has kitted with an impressive TrueDepth camera system and boast 4K video capabilities.

Even more impressively, the camera system also boasts Portrait Lighting with six effects, including - Natural, Studio, Contour, Stage, Stage Mono and High-Key Light Mono. In short, if you're serious about photography, the iPhone 11 might just be the phone for you.

Plus, to take a video, all you need to do is simply tap the photo button to switch between recording and photo. Impressively, Apple has also added slow motion video capabilities to its camera system for the first time.

Naturally, a flagship handset should come with a hefty amount of storage, and the iPhone 11 is no exception.

In fact, storage options for the iPhone 11 range from 64GB all the way to a very decent 256GB.

Although the iPhone 11 isn't definitely isn't cheap, it still costs less than the iPhone 11 Pro and 11 Pro Max. Plus, there are ways to save money or just make paying more manageable.

Which networks sell the iPhone 11?

If you don’t want to pay full price for the iPhone 11, you could trade-in your current model. You can do this via mobile recycling comparison sites like CompareMyMobile or SellMyMobile.