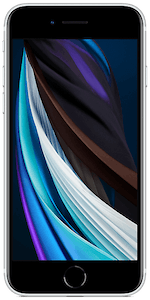 A successor to 2016’s extremely popular iPhone SE, the SE 2 is Apple’s newest small and affordable smartphone. Here’s what you need to know about it…

Here’s what the SE 2 has to offer:

The iPhone SE 2’s display clocks in at 4.7 inches. That’s the same as the iPhone 8, but much larger than the 4-inch display on the original SE.

Naturally, that’s quite a big jump. But it’s still be pretty pocketable compared with new, higher-end smartphones.
The screen is LCD rather than the OLED technology in the iPhone 11 range, which means it’s about on a par with the iPhone 8 for brightness and clarity. The iPhone SE2 contains just one camera, albeit the best single lens setup to appear on an iPhone to-date. It’s 12 megapixels.

So although you can’t take the same quality photos as you can on phones with multi-lens cameras, like one of the premium handsets, it’s an impressive snapper, none the less.

The iPhone SE’s battery lasts about the same time as the iPhone 8. It’s 1,821mAh and comes with 3GB of RAM.

Although the iPhone SE 2 is one of Apple’s budget smartphone, there are ways to save money or just make paying more manageable.

Which network is best for the iPhone SE 2020?

O2 offers a wide selection of gifts and freebies – including priority gig tickets – as well as loads of plans to choose from.