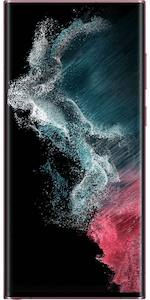 Samsung's Galaxy S22 Ultra is here. And it's a really standout smartphone. Read on and we'll take a good look at what it's got to offer.

A massive device that crams in the very latest tech, with a spectacular camera, amazing internal specs and an overall look designed to rival Apple’s iPhone 13 Pro Max.

Compare deals for the Samsung Galaxy S22 Ultra with Broadband Choices and find the best contracts from the biggest names.

The Samsung Galaxy S22 Ultra is a truly stunning smartphone.

It has a quadruple camera, stylus that harks back to the Galaxy Note range, extra RAM compared with the Galaxy S22 and S22 Plus, as well as the latest Samsung processor tech.

That vast screen is the best on any Samsung phone, with added brightness and a great refresh rate.

You can pre-order the Galaxy S22 Ultra now ahead of its release on 25th February. You can get it SIM free or on contract.

The latter two feature 12GB of RAM as standard,

Based on the classic Galaxy Note range, the rounded edges of the Galaxy S22 Ultra give it a slightly more stylish look compared with its S22 and S22 Plus siblings.

The quad camera dominates the rear of the phone. The huge 6.8-inch screen is what makes it stand out, putting it right up alongside Apple’s very best iPhone 13 Pro Max.

The quad camera on the Galaxy S22 Ultra is its undoubted calling card. It’s a truly incredible piece of kit, with a main lens coming in at 108MP.

This is designed to minimise reflection and give images a professional look. There are two further 10MP lenses and a 12MP ultrawide lens.

This is where the Galaxy S22 Ultra stands out. It is head and shoulders above the competition. It can also shoot 8K and HDR10+ video.

What’s more, the selfie camera clocks in at 40MP, making it a winner for long video calls, while its 4K video capabilities mean it’s primed for TikTok and Instagram.

The vast 6.8-inch screen on the Galaxy S22 Ultra features the very best QHD AMOLED tech, along with a 120Hz refresh rate and 1,750 nits brightness.

It also comes with a massive 5,000mAh battery, which means it can last upwards of two days on a single charge. Throw in 45W fast charging and this is a phone that’s always good to go.

If you want the very latest tech in a package that rivals the best Apple has to offer, then the Samsung Galaxy S22 Ultra is definitely worth buying.

Its specs are incredible, it looks the part and its camera is truly cutting edge. If you have the cash, it’s a no brainer.

What's the difference between the Samsung Galaxy S22 Ultra and Galaxy S21 Ultra?

They may look similar and have screens that are virtually identical, but the Super Clear shooting mode on the improved quad camera, plus the newer processor make the Galaxy S22 Ultra an even smarter proposition than its predecessor.

The key changes are inside, but no less impressive for being so.

Can I get the Samsung Galaxy S22 Ultra with poor credit?

It all depends on which deal you go for. If you have a poor credit rating, call the network or provider you wish to go with and see what they can offer.

Remember you can often get SIM only deals with poor credit, meaning you could buy a SIM free Galaxy S22 Ultra, if you have the cash available, as an alternative.