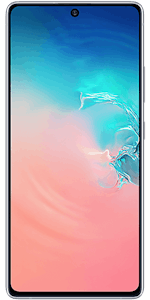 Got your eye on the latest flagship smartphone from Samsung, but don’t want to pay a premium price? The Galaxy S10 Lite might just be the phone for you. At 6.7 inches - the Samsung Galaxy S10 Lite is a lot of smartphone for not much outlay. . It sports a gorgeous, crystal-clear, Full HD+ Super AMOLED edge-to-edge display with super tough, Corning Gorilla Glass 5, too.

As with other recent Samsung phones, there's no intrusive screen notch, with Samsung instead opting for a neat pinhole camera at the top right-hand corner of the screen.

In typical Samsung fashion, the S10 Lite is a joy to use too.

Here are some of the phone’s other key specs and features:

The Samsung Galaxy S10 Lite is priced £579 when you buy SIM-free and off-contract, making it the cheapest of Samsung’s S10 range.

Given all its specs and features, the Samsung Galaxy S10 Lite is a very impressive handset indeed; ideal for anyone on a budget but who doesn't want to compromise on specs.

What's the cheapest way to get the Galaxy S10 Lite?

So, although Galaxy S1 Lite is cheap compared to the S10 and S10 Plus, you shouldn't pay more than you need to.

Comparing offers is a great way to save money, and the likes of giffgaff are likely to have cheaper deals compared to the big providers. Here is where to start looking for the best Galaxy S10 Lite deals: