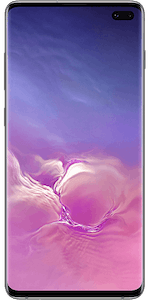 We're sorry, but there are no deals available that match your filters options

Please try changing your filters to get more results or

Samsung has crafted some truly dazzling smartphones over the years, and the latest flagship to join the ranks is the super-sized Galaxy S10 Plus. Indeed, in terms of cutting-edge tech, Samsung has truly pushed the boundaries with this one, but is it worth your money?

Unsurprisingly, the S10 Plus is a lot like the S10 to look at, only bigger. In fact, its screen-size is clocks in at an impressive 6.4 inches, with tiny bezels and edge-to-edge, Dynamic AMOLED display.

Other alterations include an extra front-facing pinhole camera (Infinity- O display), though it has the same number of cameras at the back. An embedded finger-print scanner also sits under the home screen in place of the home screen button.

Samsung phones are known to pack some serious power, especially its flagships, and the S10 Plus is no exception.

Here is a few of our favourite specs and features:

The Samsung Galaxy S10 Plus will be available to buy from March 8.

On the face of it, the S10 Plus has all the ingredients to be Samsung’s most powerful smartphone to date.

Indeed, with, up to 1TB of internal storage and an embedded finger-print sensor, as well significantly improved battery-life, we predict this could be the handset other mobile manufacturers will look to beat over the next year.

In short, we’re impressed, and if you're willing to fork out the premium price-tag, we think you will be too. That said, there are ways you can get one for a cheaper price...

So, the S10 Plus is pretty darn expensive. As we say, though, you don’t necessarily need to pay out a chunk of money in one go.

Comparing offers is a great way to save money, and companies like giffgaff are likely to have cheaper deals compared to the big providers.

Which networks sell the Galaxy S10 Plus?

Here is where to start looking for the best Samsung Galaxy S10 Plus deals: