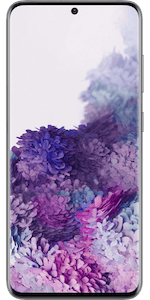 The Samsung Galaxy S20 phones teams better cameras, with a brighter screen and longer-lasting battery. Here’s what you need to know.

What's the Galaxy S20 got to offer? The camera is undoubtedly the S20's key selling point. But it's also got super fast 5G, a huge battery and the sort of super-crisp industry-leading screen that's common to all high-end Galaxy phones.

Here we take a closer look at its key features:

Front and centre on the Samsung Galaxy is a 6.2-inch display that takes up almost the entire front of the phone.

Featuring the same Dynamic AMOLED technology, it's capable of what Samsung touts as “cinema-grade colour and contrast”.

For smoother scrolling, the S20 has 120HZ refresh rate which means animations are more fluid and makes for a much better mobile gaming experience.

To maximise screen space, there's a small, pinhole notch for the front camera. Only this time, it’s moved from the top right to the centre.

And in another space-saving move, the fingerprint scanner is once again embedded within the display.

The S20 sticks fast to the design template. Although closer inspection reveals it's got rounder edges than the S10 and Note 10, while the screen has a less pronounced curve.

There are some more significant changes, too. Not least the rear camera module, which is now square and makes room for four lenses (more of which in a bit).

More controversially, Samsung has also apparently got rid of the 3.5mm headphone jack.

So if you want to use wired headphones, you’ll need an adaptor. Or you’ll have invest in a pair of wireless headphones.

S20 out of your price range? Compare S10 deals now

The S20's camera array is one of the most advanced around and includes:

The standard S20 and S20 Galaxy Plus are equipped with a 10-megapixel camera that's capable of 4K video recording at 60fps.

The Samsung Galaxy S20 features a 4,000mAh battery, up from the S10’s 3,400mAh. Like the S10 it supports Samsung's Wireless Charging 2.0, so you'll be able to charge the S20 wirelessly as rapidly as you would with a wired charger.

The S20 comes with 128GB of internal storage. Powering of all the S20 phones is an Exynos 990 processor, which is purported to be 20% faster than the Exymos M4 that was at the heart of the S10.

The Galaxy S20 4G edition is the most affordable of Samsung's 2010 Galaxy S phones and is priced £799 when bought off-contract and SIM-free. At the time of writing, contracts start from a shade over £40 per month.

The 5G edition of the phone is priced £899, with contracts priced from £50 per month or so.